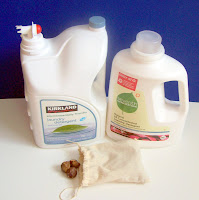 After I used my 40 loads’ worth of soapnuts, I tried using Naturoli’s “Extreme 18x” which is super concentrated natural laundry detergent derived from soapnuts themselves.  While soapnuts (review here) would be a little more natural, this liquid detergent is a tiny bit easier to use (no hunting for the little bag of soap nuts in the bottom of your washer).  Just like the soap nuts, you aren’t using much packaging at all, not dealing with bulky laundry detergent containers, and the detergent itself is natural.  It worked just as well for me as the soapnuts.  It’s processed in the USA.

I not only used it in my laundry, but I tried using it to clean around the house as well.  It cleans really well! I diluted it and used it on dirty spots on my floor before mopping, and used it to clean the glass doors on my shower.  I’ll probably continue to use it diluted as my general ‘all purpose cleaner’ around the house- it works just as well as other natural cleaners that I’ve tried- but it’s more concentrated so it’ll last longer.  For my laundry, I think I’ll stick with just plain soapnuts (buy here) since they work out to a little less per load.

Preservatives and ingredients:
Looked up the preservatives (Potassium Sorbate and Sodium Benzoate) on the Cosmetic Database, and they both got a ‘green‘ as far as low risk of hazards. Not so with the other detergents we looked at back in the soapnuts post.   I’m guessing that because the liquid detergent is so concentrated, they end up using less preservatives overall as well.

My kids didn’t react to it, and they both have super sensitive skin which has reacted to other so-called natural products before.  I think the short ingredient list (5 ingredients!) would help those who are prone to rashes, eczema, or chemical sensitivities.

Cost for this liquid detergent: We don’t have a high efficiency washer (I hear mixed reviews about them for diapers, so I’m not sure I’m in a hurry to change) so we only got 48 loads out of the 18X Natural Liquid Detergent bottle.  Chris says that now they have a pump top, which makes it way simpler to know you’re only using what you need and not wasting any.  I used the lid as a rough estimate — you guys have seen how I cook, I don’t tend to measure much ;).  Anyway, the 96/48 load 8 ounce bottle is what I tried and it retails for $16.95 / 48 loads = 0.35 for each of my standard washing loads. If you have a front loader/high efficiency, that works out to only 0.17 per load, which is awesome!  Since I don’t use a HE, I’m just going to continue using soapnuts, which worked out to 0.22 cents a load.

Environmentalisim:
I’m a huge fan of environmentalisim that is cost effective, and you can truly see the difference.  This 18x Liquid Detergent is obviously much better for the environment due to how concentrated it is, as well as the little packaging that’s used. In addition you don’t have to deal with hauling around bulky containers that are filled with mostly water.
From the Naturoli site:

Other items:
I’m generally a bare-basics kind of gal (bar soap, use coconut oil or almond oil as my ‘lotion’) but sometimes it’s nice to use something a little more exciting. Naturoli has a whole line of lotions, soaps, bodywashes, and aromatherapy with a focus quality. Other items that I’ve tried from Naturoli are their body wash, lotion, and massage oil– all worked well and had a nice natural scent, or none at all.  In the comment section of the Soap Nut Post it looks like their soapnut bar soap is a hit as well!

The links to Naturoli are affiliate links, but I’m only promoting them because I personally use this product and think it’s worth trying!  Using my affiliate link is a way you can help support this site! Thanks!