Sourdough Starter- How and Why 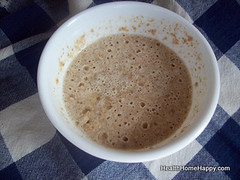 The most exciting bubbles I know of are ones that I cultured myself!  I know that natural yeasts cultivated into a sourdough starter are much preferable to commercial yeast, so earlier this summer I carefully grew a starter out of sprouted spelt flour.

About naturally grown sourdough starter from the Weston Price website:

Of course the sourdough fermentation of flour from whole wheat and rye to make bread has strong traditions in several countries of the world, whether the breads are leavened, oven-baked loaves or flat leavened breads cooked over hot coals. This method is time-consuming and–even more problematic for the modern age–requires the careful maintenance of a culture medium, the sourdough starter, which is a stable relationship of a family of wild yeast fungi and several strains of local lactobacilli. Rather like the carefully nurtured cultures and caves that produce delectable fermented cheeses, sourdough bread cultures are a product of place and the people who care for them and use them. They are all different, produce flavors and rates of fermentation peculiar and beloved unto themselves, require temperatures and other conditions known intimately and respected by the baker. Commercial baker’s yeast, on the other hand, is a monoculture of just one single variety of yeast, grown to be a consistently fast and vigorous replicator and producer of carbon dioxide, but incapable of developing grain flavors (the lactobacilli are best at that). Sourdough cultures produce reliably leavened and complexly flavored breads via the alchemical communion of the culture microorganisms, flour, water, fire and time–plenty of time.

To make the starter, I started with just a couple tablespoons of sprouted spelt flour, mixed with filtered water to form a paste, placed in a small bowl and covered with a towel to leave on the countertop.  Every couple days I added another 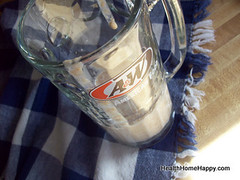 tablespoon of flour and water, and not even a week later I saw bubbles, meaning the starter was doing what it should be.  As the starter outgrew the custard cup that it was in, I put it in an A&W mug; its tall so it holds a lot, but doesn’t take up much room on my counter. I’m too nervous to transfer my sourdough down to the basement with the other ferments, I’m afraid I’d forget about it and kill it, so I let it take up precious counter space.

I used sprouted spelt flour as my starter just because I had it on hand, good quality whole wheat can be used as well.  I had followed sourdough starter recipes in the past (usually with white flour) and it seemed like an awful 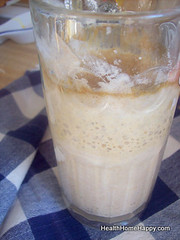 lot of waste if they didn’t work out, so I started small, only using a couple tablespoons until I saw bubbles, which meant that my starter was working and fermenting properly.

I continue to feed my starter 2-3 times a week; more if I need it to grow more so I can use it to make bread, less if I’m not making bread that week.  I’ll tell you how I make my sourdough bread next. 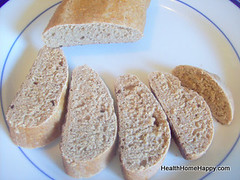