About That Gluten Study… (it’s not all in your head) 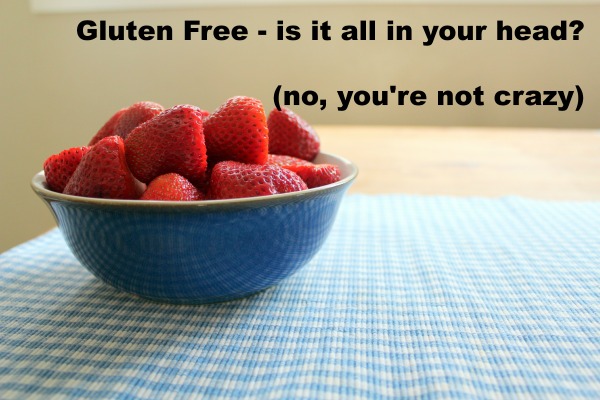 Contents hide
1 Anyway, about that recent gluten study:
1.1 1. The study was of less than 40 people
1.2 2. They’re specifically looking at IBD, many people go off gluten for many other reasons.
1.3 3. They used whey protein as their control, many people are also sensitive to whey (cow milk) protein, that’s why the GFCF diet is so popular.
1.4 4. The low FODMAPs version of the study *did* show effectiveness, suggesting that dietary change is actually helpful.
1.5 5. Based on our family’s experience, it is *more than gluten* that’s the issue.
1.6 6. On the topic of placebos.. (this IS all in your head)
1.7 7. Who funded the study?
1.8 8. The trendiness aspect
1.9 Is there another study than this? What do you think?
1.10 Leave a link or comment in the comments if you have more info, I’m happy to look at other studies as well.

I’ve seen this all over social media lately –  there was a study (link) that ‘proves’ there is no benefit to going gluten free unless you have Celiac disease.  The statistics class that I struggled through in college taught me how to look skeptically at the results of any study, and take into account how the study was conducted, how big it was, what the findings actually say, and be careful to not draw inaccurate conclusions as ‘facts’ or ‘proof’.

I readily admit that most of the health findings that I share here on Health Home and Happiness are also anecdotal evidence. I don’t have the time or resources to do double blind placebo controlled trials of a large segment of the population. That’s why you see lots of disclaimers around that *this stuff worked for me, this is why I think it worked, it may or may not work for your family*.

Anyway, about that recent gluten study:

Studies that only study a few people have findings that are less statistically significant.  Studies of hundreds or thousands of people are more reliable than studies of less.

2. They’re specifically looking at IBD, many people go off gluten for many other reasons.

Irritable bowel disease is one of the many reasons people go off gluten.  People go off for everything from autism to seasonal allergies to eczema, and many more.

3. They used whey protein as their control, many people are also sensitive to whey (cow milk) protein, that’s why the GFCF diet is so popular.

Personally, I would consider using milk protein as a ‘control’ for studying those going off gluten similar to making meth the control for those going off heroin. Yes, they’re different proteins (or drugs), but they’re both something that bothers many people.

4. The low FODMAPs version of the study *did* show effectiveness, suggesting that dietary change is actually helpful.

Chris Kresser, one of my favorite nutrition experts, talks about FODMAPs and how they affect the body.  This is a helpful finding for those of us who have seen elimination diets work in our favor.  Notice this was strategically omitted from all the mainstream news articles on this study.

5. Based on our family’s experience, it is *more than gluten* that’s the issue.

When I started looking into alternative treatments for autism for my daughter, I was a pretty normal American and really didn’t expect a diet change could change brain function.  I was going to try it, and do it strictly, so that I would ‘know it didn’t work’ and ‘prove them wrong’.  Yeah, well, guess who was proven wrong? This girl right here.  The gluten free casein free diet did help her, and then to get further healing and see much more lasting improvement, the GAPS diet worked to actually heal the underlying cause (see how this works here). Your mileage may vary, but I’m not claiming it is, or is not, ‘all in your head’.

The placebo affect (getting better because you think you will, not because of any particular drug or food) really isn’t a bad thing. Either way you’re getting better.  If avoiding wheat, or thinking that you’re avoiding gluten (for those who are jumping on the trend bandwagon and don’t realize all the hidden gluten that’s in things) is helping your symptoms, it’s testament to the power of the mind.  There are no side effects to brain power!

One of my readers brought up the question of who funded the study. I couldn’t find it with a brief search, but that’s also something to keep in mind. Did you know that when publishing studies, even to get pharmaceutical drugs approved, companies can sponsor a study, and keep running the study to get the numbers they want? For example, if they want to show that a drug is more effective than a placebo and has a low rate of harmful side effects, they can run the study multiple times, and just cherry pick the results that show what the company desires.  This doesn’t always happen, and just because a company studied something doesn’t automatically make it bad.  But it’s something to be aware of.

I agree that gluten free is getting trendy. When I see people select special gluten free baked goods, breads, and chips only to turn around and eat birthday cake at a party because it looks ‘so good, and just a little will be ok’ I roll my eyes. Or some avoid something (like strawberries!) that is naturally gluten free just because isn’t specifically labeled ‘gluten free’, I tend to think they should be doing a little more research before altering their lifestyle so unnecessarily.

I do also think that a lot of the trends are based on some sort of underlying fact.  Remember how everyone was on Adkins a decade ago? That helped get eating fats normalized and bust the carb-based diet that so many of us do poorly on.  What truth could the ‘gluten free’ craze be based on?

Is there another study than this? What do you think?

Leave a link or comment in the comments if you have more info, I’m happy to look at other studies as well.