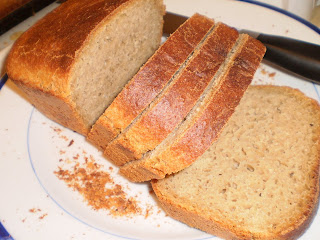 I played around a lot in the Nourishing Traditions cook book this past summer, mostly with wheat and other grains, but made yogurt, falafel, and fermented veggies too.

The grain recipes in this book are all soaked. The flour is actually what’s soaked, not the whole grain, so it’s easy for anyone to do. By soaking the flour with something acid (lemon juice, whey, yogurt- see my step-by-step instructions in the links below) the phytates that make whole wheat bread normally hard to digest and the nutrients hard to absorb are broken down. I’m able to get a nice chewy bread that is slightly sour (how we like it, we’re from the California Bay Area- home of sourdough) and isn’t dry or crumbly or brickish, which is how my non-soaked whole wheat bread turns out.

I’ve started making bread again consistently in this past month because it’s healthier, and it’s cheaper. I bought a 5-gallon bucket of wheat berries and a wheat grinder over a year ago, so having those on hand makes it practically free. 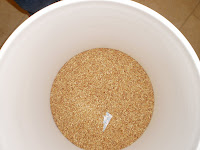 Bucket of wheat from Wheat Montana

To soak the wheat I put 4-5 cups of wheat flour in a bowl, add the juice of a lemon or a couple tablespoons of apple cider vinegar. Then I add water and stir until it’s pudding consistency. Yogurt can be used, or whey, but I’m dairy free right now to see if that clears up Sam’s eczema (it seems to be working too)

Then I cover it with a dish towel and set it on my counter for at least 12 hours, but I try for 24. After it’s done sitting, I dump it in my KitchenAid mixer bowl (I suppose this could all be done in my KitchenAid bowl, but I usually need it for something else while the flour is soaking), add a couple teaspoons of yeast, 1 teaspoon of sea salt, 1/3 cup of honey, and a few glugs of olive oil or a few tablespoons of coconut oil, and a cup of unbleached white flour. Then turn on the mixer with the dough hook on low for a few minutes until it’s all mixed. The dough is really wet, not like what you’d get when you’re kneading on the counter, but I seem to get better bread when I have wet dough. After it’s all mixed I let it sit in the kitchen aid bowl until it’s puffy, then turn the mixer on again to deflate it. Then I grease two pyrex loaf pans, put the dough in, and let rise until the dough comes up near the top of the pan. Bake at 400 for 30-35 minutes.

More about Soaked and Sprouted Wheat:

Find out more or adjust your settings.