Home » Do it yourself and save » Home made Natural Deodorant with baking soda, coconut oil, and rosemary oil 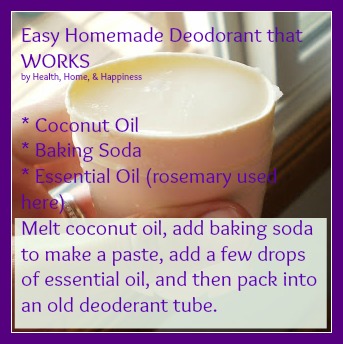 I’d read somewhere about people using baking soda and coconut oil as a natural deodorant. I’d been hanging on to an empty Toms Of Maine

Lavender deodorant container for whenever I got around to figuring out how to make my own. I did a few days ago, and I was surprised at how well it worked.

Here’s what I did:

Coconut oil (you can buy here– it’s fantastic to eat too!) I usually use expeller pressed in the deodorant, because I sure didn’t want to put expensive cold pressed organic coconut oil on my armpits. But coconut oil does have antimicrobial properties and is a solid oil, making it good for deodorant.

Rosemary oil because I kept forgetting to order lavender essential order when I ordered anything from an online health food store, and I sure was not interested in paying the $7.99 it cost at our local health food store (online it’s about $3-4 for half an ounce). So I settled on rosemary essential oil at $3.79 for 1/3 of an ounce. Rosemary has a slightly medicinal smell, which works well in a deodorant. The only other oils I had at home were eucalyptus, orange, lemon, camphor, and tea tree, all which I thought would smell odd in my underarms.

*Note: It’s said that Rosemary oil in excessive quantities may harm a pregnancy, so you need to make your own decision about this if you’re pregnant. I’m pretty sure that Lavender oil is generally considered safe, but please do your own research. I don’t really think that this is an excessive amount, but you want to research anyway and see what you’re comfortable with. 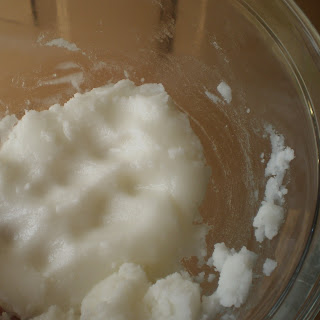 I put about 3/4 a cup of baking soda in a bowl, melted about a tablespoon of coconut oil, and mixed the melted coconut oil and 30 drops of rosemary oil in until it was mixed through. I thought that by melting the coconut oil I’d get a firmer deoderant stick once it set up. 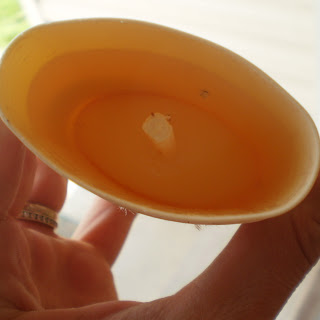 Backed out the deoderant tube. Didn’t bother cleaning the dab of Tom’s left in the bottom, just left it there. 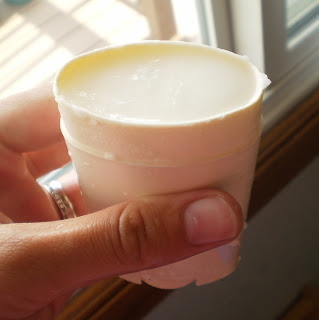 Filled it with the baking soda mixture and tapped the bottom on the counter to get all the bubbles out. 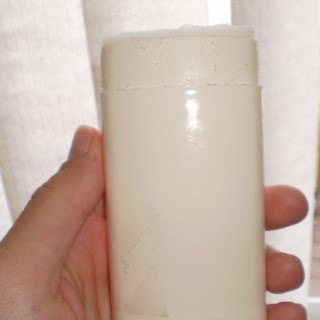 Let it sit over night to harden up, and it did.

It’s soft still, so I just raised it up a little bit to use it and didn’t press hard. It worked really well for me, better than the Tom’s. I thought it might leave residue because it’s baking soda, especially on a dark shirt, but I didn’t notice any and I wore a more tight fitting dark navy tee shirt just to see how bad it would be.

I’m happy with it and glad I tried it out.

Find out more or adjust your settings.