What is The Miracle Mineral Supplement and Is It Safe? 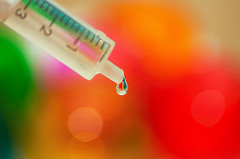 Miracle Mineral Supplement is also known as MMS, by its chemical name Sodium Chlorite (NaClO2), and as ‘that bleach thing’ by those who have heard about it but are still skeptical, and ‘the drops’ by many of those in the process of using it with their own families.  It is part of the Healing the Symptoms Known as Autism Protocol and recently has been used by a few of my friends, with varying degrees of effectiveness.

I have heard of it before, as when you have a child diagnosed with autism and are active in natural communities, you get hundreds of ‘miracle’ suggestions. I usually prioritize food and dietary changes, or supplements that I recognize (like amino acids and folate) over other supplements. So this hadn’t been a priority for me until my friends started using it and were seeing results.

Results can usually prompt me to look into something more.  These were my questions, and the answers that I found.

Is it a mineral?

Minerals are naturally occurring, are inorganic (do not contain carbon), are solid, has a fixed chemical structure, and is crystallized in structure.  (source)

Some common substances that are all minerals:

So, yes, sodium chlorite is a mineral. But that doesn’t always mean that just because it is a mineral and is natural it is healthy to ingest.

Chlorine bleach, like Clorox, is sodium hypochlorite, or NaOCl.  It is made up of one sodium, one oxygen, and one chlorine atom.

MMR is sodium chlorite, or NaClO2.  It is made up of one sodium, one chlorine, and TWO oxygen atoms.

Sodium chlorite and chlorine dioxide both differ from bleach – so no, it is not bleach.

Sodium chlorite is combined with an acid of some sort (usually citric acid or hydrochloric acid) to make chlorine dioxide, ClO2.  This form still is very different than the well-known bleach, but it also is used as a disinfectant.  It is used to clean swimming pools and for water treatment.

Since we are concerned about antibiotics and antimicrobial agents wiping out the good gut flora including good bacteria and good yeasts, in our digestive system and on our body, it makes sense to double and triple check before we consume something known to ‘disinfect’ or ‘sanitize’.

I’m especially concerned about the effect on our immune system and gut flora. I believe that a lot of problems that we have are due to overuse of antibiotics – I know that I was on antibiotics often as a child, and yes, they did appear to help.  They did get rid of infections caused by bacteria, just as MMS would. But I also believe that they caused my gut flora to be altered and long-term problems, including passing down poor gut flora to my children (read about the gut flora/autism connection here).

“Chlorine dioxide is a broad-based biocide that kills spores, bacteria, viruses, and fungi. To date no organism tested against ClO2 has proved resistant.” (source)

Another blogger has similar concerns, “So basically chlorine dioxide behaves like a completely indiscriminate antibiotic in the gut.  The side effects of nausea, vomiting, stomach cramps, diarrhoea etc. you can get as you increase the dose of MMS are consistent with this as they are the same side effects you can get with antibiotics.  These symptoms of sickness aren’t a sign of any “detox”, they’re a sign that you’re disrupting your gut flora (and with chlorine dioxide, possibly the cells of your stomach lining themselves too).  One potential effect then is, as with antibiotics, to disrupt your immune system (particularly in young children, where it’s not been fully developed) and leave you open to further infection. “

And this is antibacterial. So is it safe?

Conventionally, chlorine dioxide is beginning to be on the market for malaria, Ebola, and food pathogens, and is being distributed by a group that is owned by Johnson and Johnson (source).  Johnson and Johnson has a prior history of marketing and selling products that they knew harmed their customers (source).

Developed in a military lab, for use especially in places that do not have power, the military industry teamed with private industry to make this available to the public. (source)

It has been used to treat Ebola, malaria, and disinfect Anthrax contamination.  It is also used in Ethanol production, to clean the tanks. (source)

Chlorine dioxide is different than chlorine, most notable differences are noted here.

For cleaning things such as public water systems, sanitizing medical equipment, and possibly treating antibiotic-resistant bacteria, I would agree that chlorine dioxide would be a better choice than chlorine.

But then we get to some more claims about how chlorine dioxide works that I would like to look into more.

Chlorine dioxide is said to differentiate between pathogens and beneficial bacteria.

There are differences between pathogens and beneficial bacteria. In the first place:

• Pathogens create a waste material that is poisonous to the body.
• Beneficial bacteria do not generate any poisonous material.

All organisms and body cells have an ORP (Oxidation Reduction Potential) that can be either positive or negative. The ORP is the electrical charge that cells exert on other things in their immediate environment. Oxidizers (i.e. chlorine dioxide) also have an ORP, mostly called Oxidation Potential, and all oxidizers have a positive potential.

• All pathogens (poison producers) have a negative ORP.
• All beneficial bacteria have a positive ORP.

Positive charges repel one another. Thus the chlorine dioxide never touches the beneficial bacteria and thus the beneficial bacteria are not destroyed. On the other hand, pathogens have a negative ORP. Remember the rule that opposite charges attract one another. Thus the pathogens are attracted to the oxygen and are destroyed instantly. [emphasis mine]

The bolded statement above would make this a fantastic substance, but I was unable to find proof that it would leave the good gut flora intact.

The protocol includes both the dietary (gluten/casein/soy free, and then SCD if that doesn’t work) interventions, along with the homemade chlorine dioxide.

As part of this protocol, the gut flora would be wiped out or at least some killed off by the drops, By switching to the Specific Carbohydrate Diet we would be continuing to not feed the bacteria down lower in the GI tract, hopefully allowing a better colony to establish in the gut than was present before.

Read more: What is the GAPS Diet (it’s based on the Specific Carbohydrate Diet)

This could be helpful if the body has a really pathogenic gut flora ecology.  Kind of a clean slate, and the chlorine dioxide is able to target things like MRSA and worms that other antibiotics can’t. But it could also come at a cost, as the gut flora is an important part of the immune and digestive system, and disrupting it could potentially cause problems for life. This is why we try to avoid use of unnecessary antibiotics.

I personally would not use chlorine dioxide in my own family. I have concerns about it disrupting normal gut flora. It is true that antibiotic use can look like a ‘cure’ or even a ‘miracle’, which is why many of our parents in the 70s and 80s and even parents in the present will present to the doctor requesting antibiotics.

In my own history, I had frequent antibiotic use during childhood for infections (which were food allergy-related and I later was able to heal) and I believe it had long-term affects not only on myself but also on my children, who I passed gut flora to.

I would consider chlorine dioxide in the case of MRSA or another extreme infection, including a parasite infection.  To me, it feels like a powerful high-spectrum antibiotic and I am not sure I want to risk potential unknown health effects with my family for our now-minimal symptoms that are cleared up by eating grain-free.

I have no doubt that it has ‘cured the symptoms of autism’ in the past, as it does wipe out the gut flora and parasites like worms, and it would do as any broad-spectrum antibiotic would do (though it appears that chlorine dioxide can also wipe out cysts, and worms and fungi, which many common antibiotics have trouble reaching.) It also would have the benefit of killing parasites, which are thought to be the cause of some autism. But I believe that this comes with a risk, and it may wipe out the gut flora of some patients in a way that would trigger an autoimmune disease, digestive problems, or more, and it’s not a risk I am willing to take.