What is a Healing Crisis? 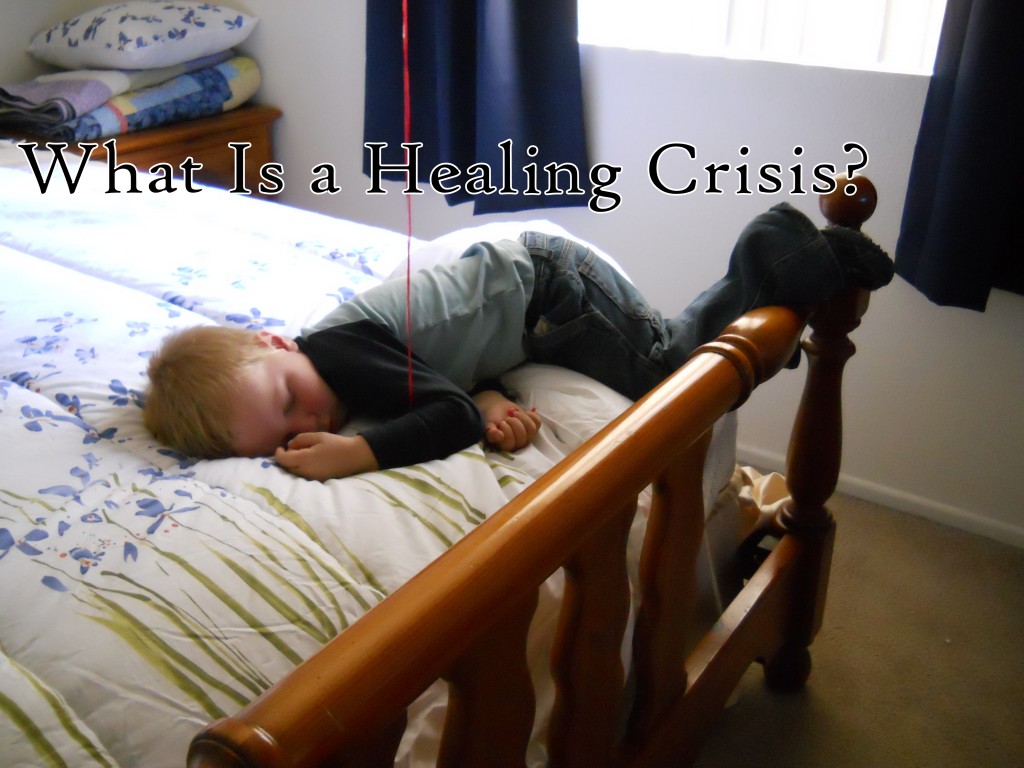 What Is a Healing Crisis?

A healing crisis is the body’s sign of being overloaded and overwhelmed with the changes that are taking place on the road to becoming healthier.  This is often due to the body suddenly recognizing and eliminating toxins that otherwise had just been sitting there.  Donna Gates in The Body Ecology Diet refers to healing crises as something that the body does as it’s organizing a major cleanse.

The first time I saw a healing crisis was when I put my daughter on a gluten free casein free diet (prior to GAPS); one of her cheeks turned bright red with the removal of gluten, which was acting like a toxin (or feeding toxins) in her body.  As we went through the GAPS Intro I saw the same red cheeks.  When I started her on B12 (B12 plays a huge roll in detoxification, which many GAPS kids have trouble with) she got night terrors/has trouble sleeping.

Night terrors and trouble sleeping are other signs of her healing crises, though these also are signs that she’s gotten food she shouldn’t have or has been exposed to a toxin.  This is where it gets tricky figuring out what is what.

What’s the Difference between a Healing Crisis and a Reaction?

This is the hardest thing to figure out when first trying a new diet, supplement, or treatment.  The way I go about figuring this out is first I look at what has been introduced- is it known for causing detoxification? If so, it’s likely a healing crisis.  A reaction is usually caused by one of the more allergic foods, foods that are difficult to digest that are being introduced too quickly, and/or synthetic products.

The third reaction/crisis that we’ve dealt with is the so-called Atkins flu that happens when switching over to a low carb diet. The first two times I put my little one on intro, she got lethargic, dry mouth, didn’t want to eat, and acted like she had the flu. This isn’t really either a healing crisis (though that is part of it) or a reaction the way someone would react to a food they’re allergic to- it’s just the body learning to run on fat rather than carbs.

Some things that cause detoxification and are likely to trigger a healing crisis:

Things that are more likely to cause reactions when re-introduced:

What are possible healing crisis symptoms?

The symptoms of a healing crisis are all over the map.  Red cheeks, headaches, joint aches, flares of asthma, irritability, spaciness, tiredness, and digestive upset are all possible symptoms of a healing crisis, but there are many many more.  You really need to pay attention to your body’s symptoms (of course consulting your healthcare professional when needed!) so you can learn to recognize a healing crisis from being sick from having a reaction.  In the 30 Days on the GAPS Intro e-book I give you a chart at the end that can help you track these symptoms and find patterns.

Should we try to slow down a healing crisis?

I do try to slow down healing crises.  They show that the body is not processing toxins as quickly as they are being released.  Epsom salt baths, extra rest, drinking plenty of fluids, eating healthy foods as your body craves them, clay, and detoxification tea can all help.

When needed I also cut the dose of whatever is causing the issue down by quite a bit (in the case of B12 we went from every 3 days to once a week for a while, then back down to every 2-3 as tolerated) and see if that helps.  Commercial probiotics, epsom salts, coconut, and kefir and/or yogurt can all require very slow introduction to keep from overloading the body.  When starting a major diet change, you may want to slowly transition over the course of a couple weeks rather than go cold turkey.

Now that I’ve scared you away from trying anything natural to improve your health, I should mention that seeing a healing crisis is actually a very helpful sign!  I was telling my neighbor who was trying her toddler on the GAPS Intro Diet, “Since he’s reacting to it, you KNOW there’s something wonky in his symptom, and it’s being fixed with food! If nothing happened, you wouldn’t know whether this was doing anything or not”.

It also is helpful to me now as I’m trying new therapies out on my little one. She had a healing crisis (night terrors) to KST.  I honestly was pretty skeptical that KST would help her, and without seeing her go through a healing crisis after just one treatment, I likely would not have spent the money to get her months’ worth of treatment, and the continued treatment has helped her tons.

A healing crisis is great for showing you where you can focus your time and energy on, because it shows what the body is responding to.

Related Article:
What is Holistic Healthcare?